In France, one in five people have a tattoo. Among the tattooed, those opting for the Viking style are numerous. With the Nordic tattoo on the rise, it’s perfectly normal to consider getting one. If you are tempted by the idea, here are 6 practical tips for carrying out this project.

Know the different Viking symbols and their meaning

Viking culture is full of symbols, each with its own meaning. These symbols are classified into various categories. It is therefore essential to know the meaning of the Vikings symbols before using a professional tattoo artist. Those are :

To learn more about the meaning of the Vikings symbols, con

Runes as a tattoo

Runes are the alphabet used over time by the Vikings. They consist of about 28 symbols and were used to communicate with the gods.

These symbols having meanings such as prosperity, strength or joy, they are not just letters, but whole words. Using runes as a tattoo can be a way to send a message for difficult times or to talk about protecting the gods. However, you have to study these runes carefully in order to choose the ones that best meet your needs.

Animals in the Vikings

Among the Vikings, there are a number of animals to which several roles and qualities are assigned. We mainly find the wolf, the ram, the raven, the horse, the cat, the bull, the dog and the bear.

The wolf, for example, is widely used by the famous Viking god Odin, a main god in Norse and Viking mythology. It is a symbol of strength, loyalty, speed and respect. These values ​​were of great importance to the Vikings. So tattooing a wolf on your body is a great way to show your Viking origins. Each of the Nordic bestiary animals represents strength, endurance and ferocity. However, there are some who are messengers like the crow. Choosing to get an animal tattoo is therefore a tribute to the Vikings, but also to animals and their values.

Tracings and knots in Nordic culture

Interlacing and knots are very common in Viking tattoos. They provide an aesthetic background for other Nordic symbols. These interlacing seem at first sight to be random, but on closer inspection, we discover a pattern. These are drawings of old battles, characters or various scenes.

Vikings and the sea

For Viking men, going to sea is a real accomplishment. They regularly foamed the seas and pillaged all the villages they crossed. Thus, there is a whole range of marine symbols perfect for a Viking tatoo. We find for example:

The first of these symbols evokes adversity and unforgiving nature and the second is a tribute. The latter, on the other hand, has great significance. Still called Ouroboros, it symbolizes both unity and destruction. The fact that it is large enough to surround the world shows how everything is connected. However, it is because it is so large that it ends up biting its own tail. The peculiarity of this tattoo is that everyone can give it a deep and different meaning. It could also be a message urging not to seek power too much.

In Viking times, becoming a warrior was the dream of little boys and they were barely teenagers when they had to prove themselves. These warriors were the defenders and conquerors of the clan. Certain symbols and characters have thus become famous. But, it is mainly the image of the Viking warrior that we find. It is materialized by: 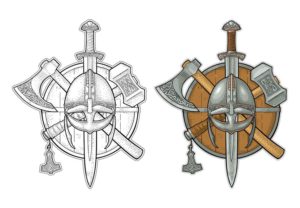 Gods occupy a special place in every culture and Nordic culture is no exception to this rule. These are very successful and their image is widely used as a tattoo motif.

Odin is the main Viking god. As such, it is widely used for tatoos. He is the god of knowledge, of war, of fury and of death. It is possible to have your image tattooed, but also to use other symbols associated with this god. Odin’s horn is in this sense the most famous and one of the most sacred. But, his crows, Hugin and Munin, also have a great reputation.

Next to Odin, we can choose Frigg, his wife. She embodies love and is known for her ability to predict future things.

Thor, on the other hand, is certainly the most popular of the Norse gods. Its attributes are lightning and rain. His tattoo can represent fertility and protection. In homage to this divinity, the images to be used are rams, chariots, a hammer (the Mjölnir)…

Finally, the Valkyrie is a warrior goddess whose name is widely used. Its role was to transport fallen warriors to Walhalla. It represents courage, glory and fame.

The most famous Viking tattoos

There are a large number of Viking tattoos in tattooist catalogs from which to choose your own. But some are better known than others.

Yggdrasil, the tree of life

The tree of life is like the 9 worlds for the Vikings. Its meaning is power, connection and knowledge. Most of the time, the branches of the tree join the roots and form a circle.

The Valknut is the image of the killed warriors. It is in the form of three intertwined triangles whose vertices are directed upwards. We often saw this symbol with the god Odin with whom he is now associated. For northerners, it involves the help of this god in difficult situations.

Skaldmö is one of the few female warriors we hear about in Nordic culture. She has a reputation for fighting like men during combat and inspires respect. She is the embodiment of courage and determination.

Aeghishalmur is mainly used for protection. He watched over the men who went to war. It is a set of 8 spades that start from the middle and form a circle.

Choose a tattoo according to your needs

For a successful tatoo, it is not enough to choose a design and go under the needle. You have to define your needs upstream.

A tattoo for men or women 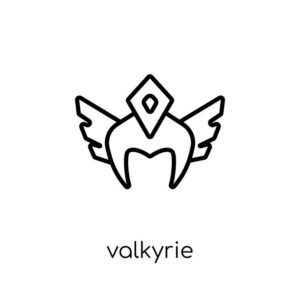 In Viking culture, women did not wear tattoos. But, no rule prohibiting it, there are several reasons reserved for women. It could be :

These are discreet and very feminine. Depending on taste, it is however possible to choose other ones. As for men, all the reasons can suit them. The difference will be noticed above all in the size of the pattern as well as its location.

Man or woman, everyone has good reasons to get a Viking tattoo. It can be a blink of an eye, a way of affirming one’s origins, or a passion for the Vikings. Given this, we will choose a discreet, imposing, colorful or black pattern.

Between tradition and modernity

Over time, some Viking motifs have been modified and simplified for reasons of modernity. The use of a runic symbol on one hand is a perfect illustration. But, the traditional reasons keep all their attraction and seduce a good number of people. Depending on whether one is afraid of the opinion of others or whether one wants to exhibit it, one or the other will prevail.

Originality is a concept that everyone wants to follow now. Having an original Viking tattoo is therefore the ideal solution for a perfect result. To do this, we can:

There is no shortage of options to guarantee the originality of a Nordic tatoo.

Here, several elements are to be taken into account. The Vikings were tattooed on the whole body except the face. A devouring passion for their culture will therefore lead to do the same. Unfortunately, for a bank employee, for example, it may not be a good idea. The tattoo will then be done on a hand, an arm, the back or the belly. Similarly, if you want to keep your tattoo hidden, you will opt for the lower back or a part of the body hidden from view. For a simple fan of tattoos and Vikings, a pattern on the back at the top is preferable.

Find the right tattoo artist for a sublime result

It is essential not to entrust the creation of the tattoo to the first comer. This one should have a few years of experience and practice for the Viking style in particular. Customer reviews and word of mouth help you make the right choice. A poorly chosen tattoo artist could have disastrous consequences. We can end up with:

In addition, by selecting your tattoo artist well, you can benefit from professional advice to maintain it.

Making a sublime Viking tattoo requires quite difficult research and decision-making. But, by following the tips above, the chances of having a perfect result that meets your expectations are higher.

What do you think?

Leading Tattoo Magazine & Database, Featuring best tattoo Designs & Ideas from around the world. At TattooViral we connects the worlds best tattoo artists and fans to find the Best Tattoo Designs, Quotes, Inspirations and Ideas for women, men and couples.

Start with TattooViral
Back to Top
Close

Your password reset link appears to be invalid or expired.

To use social login you have to agree with the storage and handling of your data by this website.